In building the LX300, Laflamme and NGC made excellent use of UAV CRAFT’s realistic environments and flight models, as well as its sensor modeling capabilities.

It is able to operate with high autonomy, transport significant cargo – in any weather – making it an ideal solution for maritime operations over long distances. With its intermediate size, gas-powered engine, and powerful tandem rotors, it has garnered a great deal of interest from many of the world’s most prestigious military organizations.

The meticulous, and intensely precise path to design, test, and build an unmanned system, or drone, can be a laborious process that takes several years or more. Launching in the fall of 2018, the LX300 is the result of diligent, efficient, and methodical work. The companies that accomplished this accelerated time to market expertly leveraged their experience as well as UAV CRAFT – a groundbreaking unmanned aerial vehicle (UAV) simulation and sensor platform. Launched in 2015, UAV CRAFT is a high-performance, high-fidelity simulator that gives customers full control of the aircraft model (avionics, aerodynamics, weight and balance, engines, flight control, navigation, etc.), payloads (EO/IR camera, Radar, LiDAR, Leddar, etc.), environments (scenarios/vignettes, weather, communications, etc.), and much more. Customers can easily customize and configure the UAV CRAFT for pilot and payload training, “test bench” research, or new product development and design.

The LX300 is a joint effort between two universities (Ecole des Technologies Superieurs and Ecole Polytechnique de Montreal), and a handful of companies. Led by Laflamme Aero, the players were NGC Aerospace, Roy Aircraft & Avionic Simulation Inc. (RAAS), and SINTERS America (DCM Group). The project as a whole was supported by CARIC, the Consortium for Aerospace Research and Innovation in Canada.

Each of these companies made excellent use of UAV CRAFT’s realistic environments and flight models, as well as its sensor modeling capabilities. Laflamme used UAV CRAFT to validate the UAV model, potential payloads and, along with NGC, to develop the AutoFlight Control System (AFCS) control laws (with the help of Ecole Polytechnique). For their part, RAAS -- working closely with Ryerson University and Presagis -- used UAV CRAFT to validate and refine Ground Control Station (GCS) ergonomics, helicopter model concepts, and simulate UAV prototypes. NGC used the CRAFT platform to refine and validate proximity object detection and collision avoidance algorithms and to perform a wide range of tests including real and simulated LiDAR and Leddar sensors, and real and simulated hardware-in-the-loop AFCS and GCS. 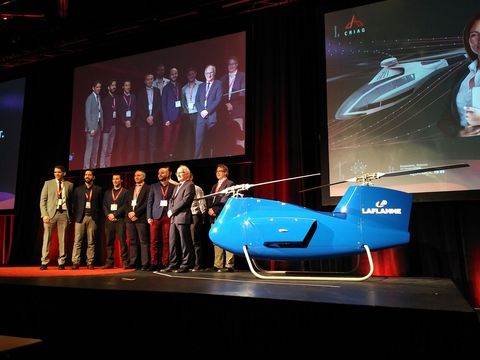 Led by Laflamme Aero, the players were NGC Aerospace, Roy Aircraft & Avionic Simulation Inc. (RAAS), and SINTERS America (DCM Group). The project as a whole was supported by CARIC, the Consortium for Aerospace Research and Innovation in Canada.

“By using UAV CRAFT for the flight model testing, our company kept adding components into the flight envelope from the conceptual phase to real development. We were then able to refine all of these components through simulation to advance our development,” said Enrick Laflamme, co-founder of Laflamme Aero. “UAV CRAFT also permitted us to demonstrate the LX300’s capabilities to a wider range of markets and customers.”

From Vision to Product

So how were these companies able to realize their vision so quickly, and with such confidence? In short; simulation before production.

Once Laflamme built a prototype, it was replicated in a simulation environment. They were able to assess changes through the simulation in order to make design changes before production began. Their tests began in Simulink where tests were basic and linear. By bringing UAV CRAFT into the flight model testing, Laflamme was able to efficiently group additional components such as autopilot systems, GCS ergonomy, and payloads – all of which were tested before final design and building the actual aircraft. “UAV CRAFT helped us adjust the helicopter’s control laws before taking the drone to the skies. By doing it on UAV CRAFT first, we are able to stabilize the vehicle and have the right behavior and proper controls, thus reducing the amount of time it takes us to make changes on the actual vehicle,” explains Laflamme. For their part, NGC was able to showcase their anti-collision/avoidance system (AURA) in a simulator before ever physically attaching it to the drone. This not only streamlined their testing procedures, but also allowed them to quickly perform trial and error tests, and identify optimal sensor placement. Several test campaigns that could have required several time-consuming flight tests were accomplished in just six weeks by simulation.

“Another approach used in the industry is to test a system directly on an experimental aircraft. The problem with that is that the environment is not controllable and there are many uncertainties, thereby increasing the risk of project cost and time overrun,” explains David Neveu, Project Manager at NGC Aerospace. “Using the UAV CRAFT, we simulated the vehicle in order to demonstrate that we have a robust solution across all possibilities and under all operating conditions. Once we have a great deal of confidence in the system, we proceeded to hardware-in-the-loop tests in the laboratory, and then directly on the vehicle where the system will be installed.”

Testing virtual sensors on virtual vehicles in a virtual world is becoming increasingly beneficial to aeronautic and aerospace manufacturers and technology development organizations. However, the benefits are anything but virtual.

“Testing on an actual aircraft means thousands of dollars. You can save a significant amount of time and money by simulating,” Neveu beams.

Throughout the development of the LX300, Presagis was on-hand to help both Laflamme Aero and NGC Aerospace surmount obstacles in the realization of the LX300 and its sensor components.

Presagis was instrumental in helping NGC Aerospace develop the LiDAR and Leddar models and simulations as they validated their short and long-range object detection and collision avoidance systems.

“Early in the project, we were impressed by the fidelity and the potential capability of the simulation environment provided by Presagis, “says Neveu. “When we used the Presagis 3D environment it was for both software and hardware-in-the-loop validation.”

“We worked very closely with Presagis and always received excellent support – we were confident that their expertise and knowledge would help us,” describes Laflamme. “Presagis had to train some of our personnel, and supported us from the start and we couldn’t be happier with the service.”

UAV CRAFT was an indispensable design and testing tool that helped Laflamme go through countless virtual tests, iterations and designs in order to arrive at an extremely performant, reliable UAV that is almost certain to benefit of years of service in a variety of industries.

UAV CRAFT
Design based on a robust, modular platform that is capable of evolving as your goals and requirements change.
Sensors
Radar, night vision, infrared, and thermal; because military operations rarely happen on a bright, sunny afternoon.
White Papers
Educate. Research. Innovate.
of